By Andrew Hahn of the Wisconsin Center for Investigative Journalism

Wisconsin voters’ concerns about pollution in lakes and streams, contamination of drinking water supplies and depleted aquifers are transforming water into a key campaign issue in this fall’s elections, including the race between Republican U.S. Sen. Ron Johnson and former Democratic Sen. Russ Feingold.

In Wisconsin, water worries have increased in response to shifts toward large-scale livestock farming and growing knowledge about the threats that lead and other contaminants pose in various regions.

Residents of Kewaunee County and the Central Sands region of the state — two of the areas most vulnerable to groundwater pollution — are demanding answers from politicians who acknowledge they cannot afford to ignore water issues if they want to keep their seats in the 2016 election.

Testing over the past few years has uncovered widespread contamination from bacteria, nitrate and viruses in private drinking water wells in Kewaunee County — some of it linked to the proliferation of large dairy farms known as concentrated animal feeding operations, or CAFOs.

The Wisconsin Center for Investigative Journalism’s Failure at the Faucet series also has found that hundreds of thousands of state residents are at risk of drinking water with unsafe levels of nitrate, bacteria, arsenic, lead and other contaminants.

Sharpless said Wisconsin has not had the type of defining environmental disaster that has driven change in other parts of the country and at other points in history. 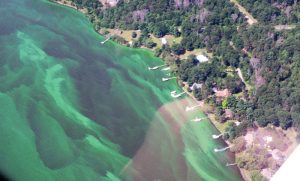 “We have had no equivalent to the Love Canal disaster or when Cleveland’s Cuyahoga River caught fire in 1969,” Sharpless said.

State Rep. Scott Krug, R-Nekoosa, said the move of large dairy interests into his Central Sands district has changed the political landscape for him.

Recent data show the administration of Gov. Scott Walker, who has declared Wisconsin “Open for Business,” has been loathe to hand out fines for environmental infractions. A recent report from the Legislative Audit Bureau found the state Department of Natural Resources failed to follow its own policies 94 percent of the time over 10 years when wastewater treatment plants or large farms violated terms of their permits.

While high-capacity wells have been blamed for drying out lakes and streams in the Central Sands, Republican Attorney General Brad Schimel has issued a formal opinion that Wisconsin officials lack the legal authority to block any well based on drawdown from existing wells.

These moves have sparked sharp criticism by some residents in Krug’s district that Wisconsin’s leaders are not protecting its water resources. Krug acknowledged that because of high-capacity wells, “There are parts of my district where lakes have entirely disappeared.”